All proceeds from the door and CD sales will be donated for humanitarian aid to Ukraine.

Beverly Dobrinsky invites you to come explore the ” bilij holos/pure voice” folkstyle of singing from E. Europe. Ukrainian language facility is not required: translation, pronunciation and transliteration will be provided.

If you are curious and interested in learning and singing Ukrainian folk song, she is offering once a month drop-in singing sessions on the last Sunday of every month starting in September 2019 at the Ukrainian Cultural Centre, 805 E. Pender St. Drop in fees are $5-10 based on what you can afford.

For almost 3 decades, Beverly has been singing Ukrainian folksong. She started the Slavic Soul band, ZEELLIA in 1991 to celebrate the centenary of Ukrainian immigration to Canada, and has been conducting the Barvinok Choir at the Ukrainian Hall since 2001, where she recently started a children’s choir in 2016. She has travelled to Saskatchewan and Alberta learning from elders who she featured on her 3rd ZEELLIA CD, Tse Tak Bulo, released in 2016. 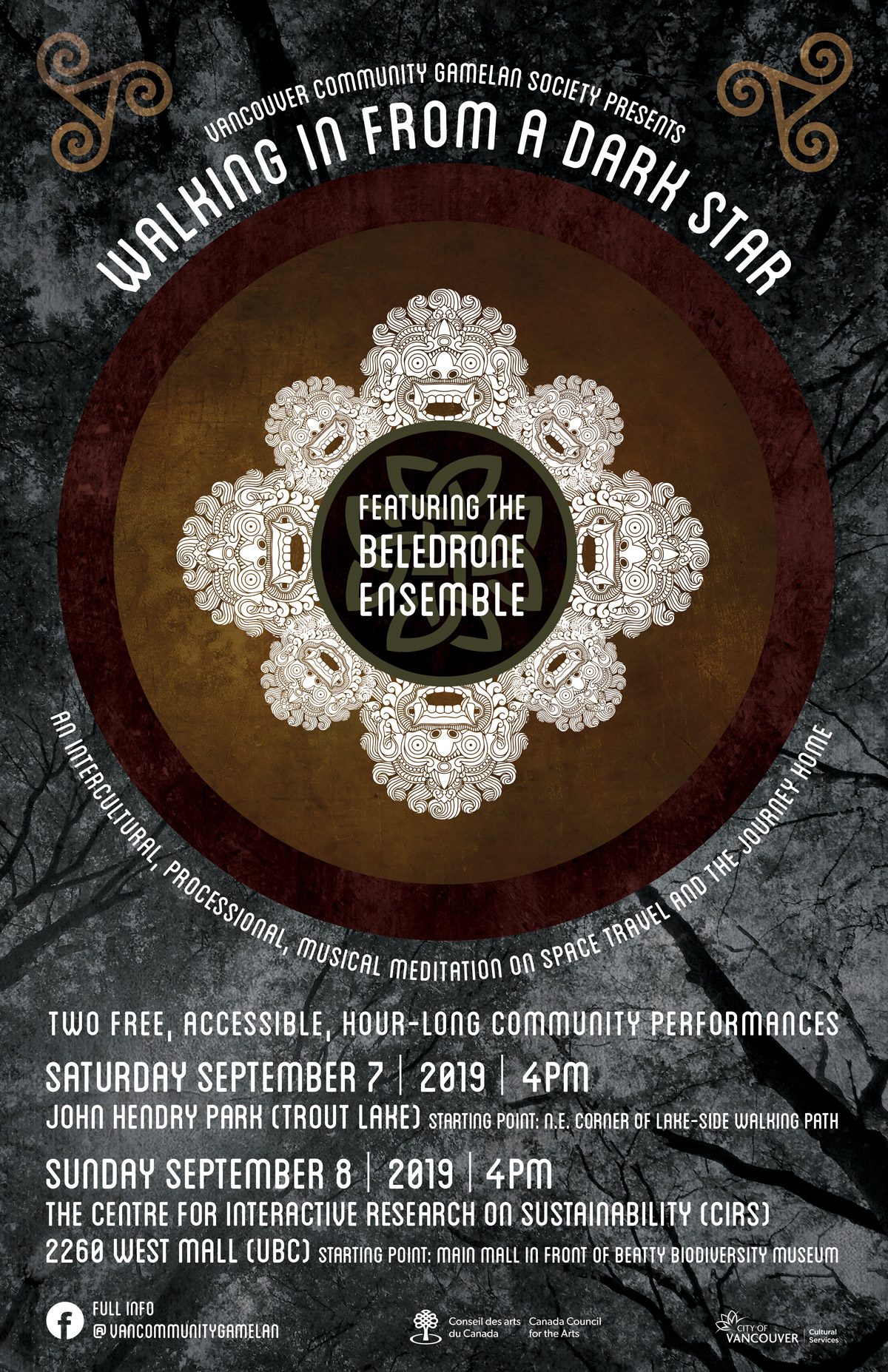 An Intercultural, Processional, Musical Meditation on Space Travel and the Journey Home

The Vancouver Community Gamelan Society is proud to present Walking in from a Dark Star, a new work for the Beledrone Ensemble. Walking in from a Dark Star serves as an invitation to reflect on planet Earth from the perspective of outer space: to consider our brief walk as a metaphorical journey to a place unfathomably far away—a ‘Dark Star’—and back, accompanied by the thoughts and spirit of West Coast artist/inventor Tom Flemons, The Grateful Dead, Frank Zappa, U of C Solar Car Team, cetologist Paul Spong, astronaut Yuri Gagarin, and Writing-on- Stone, Alberta.

The Ensemble was formed in 2011 by O’Neill in collaboration with I Wayan Sudirana, a Balinese musician and instructor of gamelan at UBC. (Gamelan refers to the gongs and metallaphone- based orchestras of Java and Bali.) As a long time bagpipe player, O’Neill noticed the similar traditional role played by Balinese processional gamelan beleganjur and Scottish highland bagpipes in cremation/ funeral ceremonies and other rituals. Combining these with Ukrainian style singing and western classical strings, Beledrone has become known for its “earthly and ethereal sounds” (Music on Main) and virtuosic performances.

Jurij Fedynskyj, a musician and luthier from Ukraine is touring across Canada with his lecture/ performance featuring 3 traditional Ukrainian instruments—  torban, kobza and bandura he has recreated from studying old museum pieces in Ukraine.

In his own words, “  …  we now have the chance to discover our “ethnic” or “traditional” national instruments for the first time, this fall. I myself, originally from Raleigh, North Carolina, have spent the past fifteen years in Ukraine, researching the original bandura, kobza, and torban. From studying authentic construction, to researching archaic repertoire, to mastering traditional playing manner and technique, the initial stages of reconstruction have taken place. Now it’s time to share that wealth of musical culture to the North American diaspora. From this September to October, I’ll be “kobzaring” in a similar fashion as the traditional, blind kobzars would have. I’ll be traveling to the main diaspora hubs in Canada, such as Toronto, Winnipeg, Edmonton, Vancouver etc. There will be some fixed dates at museums and cultural centers, but mostly my schedule will be open to wandering region to region, and house to house. The kobzars were not concert artists as most bandurists today are. They had their own unique philosophy of how to spread their word, to those who needed to hear it. I will be presenting these three musical and cultural treasures through lecture and demonstration. I’ll also share my experiences in living in Ukraine as a cultural pioneer, working with ensembles such as Haydamaky, Karpatiyany, Khoreya Kozatska, and Drevo; as well as creating the Poltava Kobzar Guild, and festival “Drevo Rodu Kobzarskoho.” This fall we’ll have the chance to experience “Kobzaring in the New World”.

He and violinist Oleh from Kiev will be performing at the Ukrainian Hall at 805 E. Pender St. in Vancouver, BC on September 4 at 7 pm. He has also invited AUUC choir director Beverly Dobrinsky to join them with her lira. Admission is by donation. For more information, you can go to :http://kobzarskiytabir.bravesites.com

This event will be broadcast live by CiTR AT 101.9FM, with live streaming and podcasts available at citr.ca
Tickets $35 regular, $15 students (includes taxes) [Buy tickets]

Michael O’Neill (Vancouver)
stone garden *
For gamelan, bagpipes, and voices.
stone garden is an intercultural work for Balinese gamelan beleganjur, Scottish bagpipes, Ukrainian bilij holos (white voice or pure voice) singing, and chorus. It is a rumination from a personal perspective on end-of-life matters, recognizing the shared traditional role of beleganjur and bagpipes in cremation/funeral ceremonies. Weaving through the piece, with light, humour, and gravitas are the words of celebrated Vancouver poet Gerry Gilbert. Performed by the Beledrone Ensemble.

* World premiere, commissioned by Vancouver New Music with the assistance of the Canada Council for the Arts.

Available online at http://www.brownpapertickets.com/event/685947
Or at Highlife and Banyen Books

DakhaBrakha is a quartet from Kiev whose sound is at once mesmerizing and mystical, melding soulful Ukrainian folk with the jazz and trance sounds that typify World Music. Aptly named, “DakhaBrakha” means “give/take” in the Ukrainian. Mixing the fundamental structure of folk music with free-form improvisation, the Kiev, Ukrainian “ethno-chaos” band DakhaBrakha creates a mesmerizing world of unexpected and engaging new music. On stage, Indian, Arabic, African, Russian and Australian traditional instrumentation melds with the quartet’s astonishingly powerful and uncompromising vocal range to create a trans-national sound rooted in Ukrainian culture. www.dakhabrakha.com.ua

This 85th Anniversary tribute interweaves oral history with live theatre and music, haunting choral singing and the driving rhythms of Ukrainian dance.  Performed by a multi-generational cast of over sixty professional and community actors, singers, dancers and musicians.

Produced by Vancouver Moving Theatre and Downtown Eastside Heart of the City Festival in partnership with the Association of United Ukrainian Canadians.

Slowpoke: A Journey into the Chernobyl Exclusion Zone

This powerful work was performed and created by Radix Associate Billy Marchenski and Vancouver dance artist Alison Denham, with direction by James Fagan Tait and music by Beverly Dobrinsky. The show used theatre, dance, and projections to tell the sometimes harrowing-sometimes humorous story of a journey inside the Chernobyl Exclusion Zone.

Billy was inspired to create the exploratory work after visiting the Ukrainian National Chernobyl Museum in 2010. In the fall of 2011 he and his partner Alison packed their cameras and bags to visit the Exclusion Zone and begin developing a show about Billy’s experience.

Performed in the intimate Russian Hall, the Slowpoke narrative played out on two levels: the first recounted Billy and Alison’s trip to the zone itself. The second meditated on the enormous time scale the incident plays out on and what it means for humanity to possess the power to alter the environment so drastically.

The work’s title is both a nod to this timeline and a reminder of Canada’s connection to nuclear energy as manufacturers of the Slowpoke reactor, built in the 1960’s and still in use in parts of Canada today.

STRANGE SONGS OF TRUST AND TREACHERY

grunt gallery is pleased to exhibit Strange Songs of Trust and Treachery by Vancouver-based artist, Laura Lamb. The exhibition features several installations that reveal the curious fictional world that the artist refers to as Lamb’s Performing Objects.

The artist describes Lamb’s Performing Objects as, “An umbrella project including videos, installation, drawings and texts, in which all parts work together as a collage. Each fragment informs the others to evoke a fictive world of wandering performers, some human, some almost human, who through song, story and circus ravel and unravel 20th century cultural mythologies. The concept of Strange Songs of Trust and Treachery grew from a set of song lyrics I wrote for the character Lotte Obratsov. Lotte first appeared in a set of small mixed media figures, which were in turn based on a set of drawings.”

Russian lacquerware, rusty metal household objects and clockwork mechanisms perform in Bits and Tatters, the first installment of a video trilogy. Accompanying this video is a song that Lamb wrote and produced with composer and singer, Beverly Dobrinsky.

“My work investigates the gaps and disjunctions between the frailty and clumsiness of performing objects (for example puppets, toys or masks) and their power as producers of complex and compelling narrative,” says Lamb. “It’s in these gaps where the comedic and transcendent power of objects is able to emerge.”

The opening reception for Strange Songs of Trust and Treachery will be held at grunt gallery on Friday April 5, 2013 from 7-10 pm. The exhibition will run from April 5 – May 4, 2013.

Come and enjoy a feast of performance at the Association of United Ukrainian Canadians (AUUC)season opening concert and supper. The cultural forces of the Ukrainian Hall: Dovbush Dancers, the Vancouver Folk Orchestra and the Barvinok choir will be joined by special guests: Brazilian dancers Axe Capoeira, poets Zaccheus Jackson, Muriel Marjorie; and gamelan and bagpipe ensemble, Mearingstone. I will be singing with Mearingstone, as well as conducting the Barvinok choir.

You are invited to join me for an afternoon of remembering and sharing. I have had the pleasure of spending the summer in the homes of many gracious people who have shared with me their experiences connected with the Ukrainian Hall. Many were born and grew up in this neighbourhood and worked in this neighbourhood; and even when their families moved, the Hall remained their home away from home. The Ukrainian Hall has served as a community meeting place since its inception in 1928; and these stories reflect how she has served her community over the years.
Come to listen, and to add your voice to our collective experience. This story gathering will be the foundation for the creation of a script for Vancouver Moving Theatre`s production of “Bread and Salt” which will be premiered at the 2013 Downtown Eastside Heart of the City Festival in conjunction with the 85th anniversary of the Association of United Ukrainian Canadians. http://www.heartofthecityfestival.com

LAURA LAMB: Strange Songs of Trust and Treachery
as sung by Lotte Obratsov in the Celebrated Opera “Century.”
This evocative, layered, fragmented narrative video will be performed by figurative objects made of paper mache, fabric and mixed media; and drawings and texts in a miniature set with an original song-based sound track which I have  composed and recorded for the final production to be released later this year.